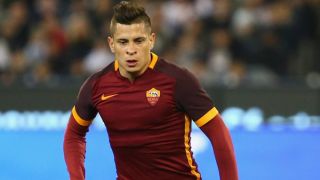 The Premier League team paid a loan fee of €1.2 million with a further variable €1m to be paid "for bonuses linked to the achievement of the club and the player of certain sporting goals" and have an option to sign the 22-year-old on a permanent deal for an undisclosed fee.

Iturbe did not have clearance to make his debut in time to face Leicester City, who Bournemouth held to a 0-0 draw on Saturday despite playing for much of the second half with 10 men following Simon Francis' red card.

Howe thinks Iturbe will add an attacking spark to his team, who have suffered with a number of key injuries this season.

He told Sky Sports: "If we get clearance and work permits - which we are hopeful to get - he will bring us a bit of pace, a bit of creativity and guile.

"He is a talented boy and we hope he fits in well."

The draw with Leicester meant Bournemouth had only lost one of their last eight matches in the Premier League and Howe was impressed by the performance.

He continued: "I think when you play with 10 men for such a long spell in the game, to come away with anything is a huge result and full credit to my players for that.

"No matter how we got it, I think is definitely a point gained and I have to compliment my players."