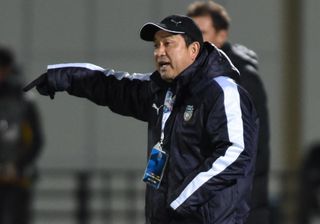 Successive wins for Frontale has seen them close to within just one point of leaders Urawa Reds, who were without a win in three before Saturday, but they almost squandered a big lead against Cerezo.

The visitors initially took the lead with just five minutes on the clock when Takumi Minamino struck the net, but Yu Kobayashi and Yoshito Okubo netted in a quick-fire double soon after to put Frontale in control.

Renatinho extended the lead from the penalty spot with 26 minutes gone and Kengo Nakamura got the fourth on the stroke of half-time as Frontale appeared to be cruising.

However, goals from Yusuke Maruhashi and Kota Fujimoto brought Cerezo back into the contest with 15 minutes to go but, although Diego Forlan did score their fourth late on, Kobayashi's second of the day had already taken Frontale on to five and they ultimately held on to move above Sagan Tosu.

Urawa stay in pole position, though, thanks to their triumph over visitors Sanfrecce Hiroshima.

Yuki Abe's seventh league goal of the season in the 22nd minute was enough to earn all three points, moving them on to 40 for the season.

Sagan sit three points worse off in third, but they slipped down a place as a result of their 2-0 home defeat to Tokyo, who in turn leapt up to fifth.

A slender 1-0 victory over Ventforet Kofu allowed Kashima Antlers to strengthen their grip on fourth and close in on the top three, while Kashiwa Reysol beat Vissel Kobe 2-0 in their top-half clash.

At the bottom, Tokushima Vortis suffered their fifteenth loss of the campaign as Yokohama F. Marinos defeated them 3-0 in their own stadium, while Omiya Ardija fared little better in their 2-1 reverse at Albirex Niigata.

Vegalta Sendai let a two-goal lead slip against Shimizu S-Pulse, but a late winner secured a 3-2 win to move them towards mid-table and Nagoya Grampus's 1-0 win at Gamba Osaka keeps them just above the bottom three.