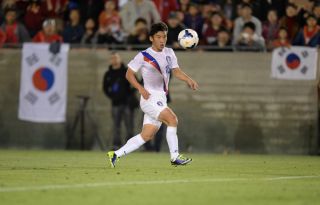 Yoshida's men closed to within a point of J-League leaders Urawa Reds as the stand-in coach masterminded his first J-League success since taking the reins from Yoon Jung-hwan.

Yoon left his post earlier this month despite leading Sagan to the top of the table after a falling out with the club's hierarchy, but following victory in the Emporers Cup in midweek, Yoshida has wasted little time in picking up where his predecessor left off.

Kim Min-woo's opener for Sagan was cancelled out by Akihiro Ienaga before Kota Mizunuma netted in the 70th minute and Kei Ikeda converted soon afterwards to wrap up victory, keeping Omiya in deep trouble and continuing Sagan's upward curve.

Urawa had hoped to maintain their three-point lead at the top of the table, but in the end they will have been relieved to take a point away from a thrilling 4-4 draw with Tokyo.

The visitors forged ahead with just six minutes on the clock through Tsukasa Umesaki, but a brilliant spell from the hosts saw Tokyo race into a 3-1 lead by the 23rd minute.

Hideto Takahashi, Yoshinori Muto and a Hiroki Kawano penalty turned the game on its head, only for the momentum to swing again.

Urawa brought themselves level as a penalty just before the break from Shinzo Koroki and Tadaaki Hirakawa's goal in the 60th minute set up a gripping final half-hour.

Tokyo thought they had struck a decisive blow when Yoshinori Muto grabbed their fourth with 26 minutes left, but Tadanari Lee struck from the penalty spot 10 minutes from time to ensure it ended level.

Kashima Antlers remain in the hunt at the top as they extended their unbeaten run to eight league games in a 3-1 triumph at Shimizu S-Pulse, while Kawasaki Frontale slipped to fourth following a 2-0 defeat at Yokohama F Marinos.

At the bottom of the table, Tokushima Vortis picked up only their third league win of the season as they beat Albirex Niigata 2-1, but they remain nine points from safety.

Ventforet Kofu and Gamba Osaka treated spectators to late drama as three goals were scored in the final six minutes of their 3-3 draw.

Ventforet edged ahead with a quick-fire double in the dying stages from Ryo Yamamoto and Takuma Abe, but Shu Kurata's 93rd-minute equaliser salvaged a point for Osaka.

Vissel Kobe returned to winning ways with a 2-1 win over visitors Vegalta Sendai, while Nagoya Grampus drew 1-1 at home to Kashiwa Reysol and Cerzo Osaka were held to 0-0 at Sanfrecce Hiroshima.