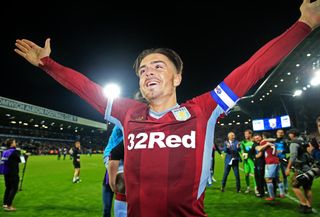 The midfielder helped Villa to a 4-3 penalty shoot-out win at 10-man West Brom on Tuesday to reach the Sky Bet Championship play-off final.

He scored from the spot after Villa had lost 1-0 on the night to draw their semi-final 2-2 on aggregate after extra time.

Jed Steer saved from Mason Holgate and Ahmed Hegazi in the shoot-out to send Villa through to their second successive play-off final.

They lost 1-0 to Fulham last May but, ahead of a Wembley showdown against Derby or Leeds on May 27, Grealish is confident.

He said: “It’s massive to get there again. I was part of it last time. We know how it feels to lose. I have the experience of it.

“It’s no good going on a good run and then going to Wembley and falling at the final hurdle again. I truly believe we can get promoted.

“We will enjoy our few days off now and then get prepared for the final.”

Craig Dawson’s first-half header levelled the tie on aggregate but Albion could not force a winner and Chris Brunt was sent off after a second yellow card with 10 minutes of normal time remaining.

Tammy Abraham scored the winning penalty after Albert Adomah missed the chance to win it for Villa.

“We got here and West Brom put on a good performance,” Grealish told the club’s official site. “They made it hard for us. It was a tough game. The crowd made it tough with the atmosphere.

🗣 "We're hungry. We want it more than ever this time around."@JackGrealish1 and @ConorHourihane react amid scenes at the final whistle.#AVFCpic.twitter.com/8wCM69Eovy— Aston Villa (@AVFCOfficial) May 14, 2019

“But thankfully we’re on the way to Wembley. If I’d chosen a way to do it, it would have been on penalties. It makes it that little bit sweeter.

“It makes it that extra bit sweeter doing it in front of our away fans, too. They were out in full force as always.”

Albion must now resolve the future of caretaker boss Jimmy Shan after they missed the chance for an immediate return to the Premier League.

“Whatever the club deem, I’ll do to the best of my ability,” said Shan, who won seven of his 13 games after replacing Darren Moore in March.

“I’ve thoroughly enjoyed it. I’ve got 18 years under my belt, the test for me was can I do it at first-team level?

“It was a caretaker role at the back end of the season and in the 13 games I think I’ve done myself credit. I’ll look back on this with some sense of pride.”