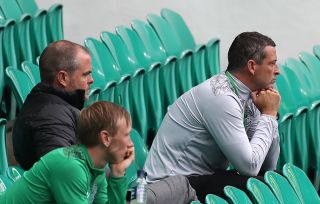 Jack Ross praised Kevin Nisbet’s performance after the Hibernian striker grabbed a hat-trick in a comprehensive 4-1 win over Livingston.

The former Dunfermline Athletic frontman got his first two goals for his new club before the interval then calmly slotted in a late penalty for his third.

Having failed to score on his debut against Kilmarnock, Ross was pleased to see Nisbet leave his mark.

“I’ve been really pleased with how Kevin has settled in,” said the manager. “He’s made a big impression with everybody from the first time he trained with us.

“People were impressed with how good a player he was. He played well last week for me as well and played a big part in the first goal. But because he didn’t score, some people judge him on that. So to score and then go on to get a hat-trick is brilliant for him.”

Ross admitted it was a risk to change the team from last week by moving Martin Boyle to a wider role to accommodate Christian Doidge in attack. But with Doidge also getting on the scoresheet the Hibs boss felt vindicated.

“You do something like that as a manager and it doesn’t work and you get criticised. And it’s the same with in-game changes. Such is the nature of the beast nowadays,” Ross added.

“But we struggled here last season and Livingston’s record here overall is brilliant. So we looked long and hard at it and picked a team that we felt would deal with them in possession and then let us do what we wanted to do when we had the ball.

“We wanted to get the ball wide and into the box and to do that you really need two strikers on the park. On another day it might not have worked but today it worked a treat for us.”

Livingston’s only consolation was a Lyndon Dykes penalty when they were already three down, leaving manager Gary Holt frustrated.

“We were not good enough, simple as that,” he said. “We have to look at ourselves. I will look at myself and others have to do the same.

“I take my share of the responsibility. It was my team, my system, and did it work? I’m not sure. So, I will take that on the chin. But, at the end of the day, the players had to do their job and I don’t think too many did that today.”