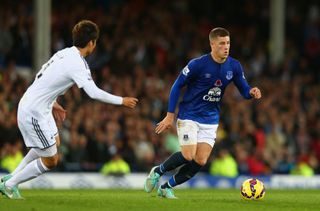 Barkley rose to prominence after an impressive season at Goodison Park and his form earned him a place in England's World Cup squad, leading to reported interest from the likes of Manchester United and Manchester City.

The 20-year-old struggled to impose himself in Everton's 0-0 draw with Swansea City in the Premier League on Saturday, though, with the midfielder often man-marked.

However, Jagielka has backed his fellow England international to learn to cope with such an approach in the future.

"That is what happens to the best players. They watch the videos of him and they do target him to make sure if they keep him quiet in a game it can affect his team," Jagielka said.

"He is going to have to deal with it and I can't see it getting much easier for him as he goes on in his career, but he's more than capable than dealing with it.

"Nothing gets him down. If you look at this game, I wouldn't say it was his best game, but he kept on going.

"A lot of people in that situation can hide and not want the ball, but I'd never expect Ross to be one of those players."