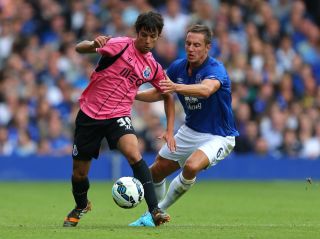 Jagielka played the full 90 minutes in England's opening two matches in Brazil, with Roy Hodgson's men falling to 2-1 defats against Uruguay and Italy.

Everton manager Roberto Martinez has been forced to rest the defender, along with United States international Tim Howard and Belgian pair Romelu Lukaku and Kevin Mirallas ahead of the new season.

And Jagielka conceded that he may miss the opening game against Leicester City on August 16 as he seeks to overcome the niggling knee injury he picked up in a friendly against Porto.

"I'm hoping the extra week or so we got will help us get through it," Jagielka said in quotes reported by the Liverpool Echo.

"It might not be the first game [I return for]; although I actually fancy my chances of being fit enough to play.

"But further on in the season, and it'll be a long one, that extra break will have given you the time you needed to shut off from the football world. Only time will tell.

"At the moment I feel good. I didn't have my best game against Porto in the first 45 minutes but it's not really going to affect my thinking.

"It's part and parcel of pre-season – I haven't won too many trophies in pre-season.

"It's just a case of getting through it, and maybe judge us after the Leicester, Arsenal and Chelsea games and seeing how the lads look then."