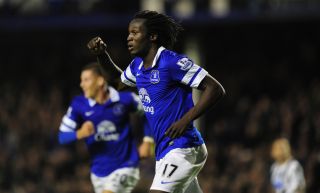 The Belgium international arrived at Goodison Park on the final day of the transfer window on a season-long loan from Chelsea and Jagielka believes he can take them to the next level.

Lukaku scored a late winner on his debut against West Ham, and grabbed a double on his first start for the club against Newcastle on Monday.

Jagielka has been impressed with what he has seen of the striker since his arrival and predicted a big future for the 20-year-old.

"He's a real presence up front," the England defender said. "First and foremost he's a fantastic lad, on the pitch and the training field, he’s just desperate to do well.

"He's a fantastic acquisition for us. He's a great player and has probably taken us up to that next level. If he can keep himself fit and keep himself confident, he could be great for us.

"He has all the attributes to be a top-class player and he’s still quite a young boy.

"When you look at him and he’s so physically well developed, you expect him to be in his late 20s but he's just a young man. It makes it quite scary to think, really."

Lukaku scored 17 goals for West Brom last season and had hoped to remain at Stamford Bridge before sealing a move to Everton.