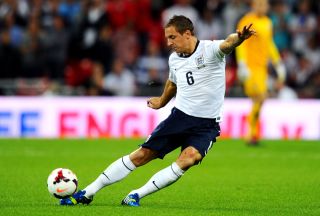 England top Group H ahead of Friday’s game so their destiny is in their own hands with a final qualifier to come against Poland at Wembley next Tuesday.

Wayne Rooney has been in fine form for Manchester United this season, while Liverpool striker Daniel Sturridge has been prolific and Roy Hodgson can also call on Danny Welbeck, Rickie Lambert and Jermain Defoe.

After coming up against his international team-mates in training at St George's Park on Tuesday, Jagielka is confident England can cause Montenegro plenty of problems.

The centre-back said: "It is important that Roy has attacking options and they looked very sharp in training today, I can tell you that from first-hand experience.

"None of us in the game are surprised by Sturridge's form. He's playing with confidence and it makes him a real handful

"We know we need to go out and win these games; we have a massive job to help provide a platform for the attacking players."

England will be without the injured Ashley Cole on Friday night, meaning Leighton Baines is expected to deputise at left-back.

Jagielka believes the Three Lions are fortunate to have players such as his Everton team-mate ready to come in.

He said: "Ash has done a fantastic job for England but a lot of people are saying it's been close between the two and If Bainesy gets a chance I'm sure he won't let us down."

Jagielka knows the pressure will be on England, but is thriving on the opportunity to play his part.

"The pressure is on, there's no hiding from that. But I'd much rather be here than cheering them on from home," he added.

"The main thing for us is that we weren't relying on any favours; we would like to have had it done and dusted by now, but we want to get on the plane to Rio and it's in our own hands.

"We all know the task that lies ahead, quite a few people been in this position before and there are also some young lads. We're all confident we can go out there at a packed Wembley arena and do the job."