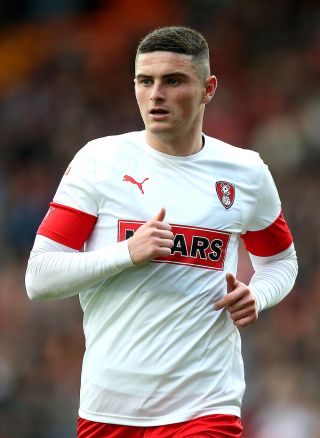 Winger Jake Hastie has returned to Rangers midway through a season-long loan deal at Rotherham.

The Sky Bet League One club confirmed an agreement had been reached between the two clubs to end the loan spell early.

The 20-year-old scored in his first three appearances but has only started one of the Millers’ last 12 games.

Rangers’ summer signing from Motherwell made 16 appearances in total, finishing on three goals.

Hastie joins a large pool of wide players at Ibrox and assistant manager Gary McAllister admits some have to do more to get in the team.

Reports claimed this week that Rangers were looking to offload Jordan Jones and Brandon Barker to free up space for a new signing, with fellow wingers Jamie Murphy and Eros Grezda having already moved on this month.

“All the coaching staff wanted those guys here. They are two players who we thought could influence games when it’s very, very tight.

“Recently the pair of them have been injured and it’s up to them to show the manager and the management group, they have got to do more to get in the team. If they show us in training, they will get an opportunity. ”

On the prospect of adding to the squad before the transfer deadline, McAllister said: “We are continually looking to improve and at any given moment when an opportunity arises we have got to be there and ready to strike.”