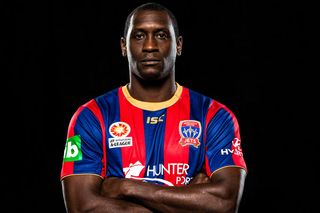 The Jets, missing their marquee striker due to a knee injury suffered in pre-season, have failed to find the back of the net in three matches, losing their opener 2-0 to Sydney FC, before successive 0-0 draws at home against Perth Glory and away to Wellington Phoenix.

Former England international Heskey could be available for the F3 derby at home to Central Coast Mariners on Saturday, and Jaliens believes the centre forward's inclusion would be a major boost for Gary van Egmond's team.

"He will give us more confidence and we can change our way of playing because Emile is strong in the air and can keep the ball more," Jaliens told reporters.

"It will give us more options in the attacking point of view and Emile knows when to head for the goal or when to just keep it, so he's also experienced in that."

Despite having a squad bursting with young attacking talent, the Jets have underwhelmed early in the new season, but Jaliens, brought in by Van Egmond to marshal the backline, is not concerned about the team's lack of spark in front of goal.

"I'm at ease, we're heading in the right direction, the goals will come if we keep playing like this," Jaliens said.

"For me it's just to keep confident and keep doing the things we are doing at the moment.

"I came here to sort out the defence, I try to teach them moments in the game, for example when to pressure or when to drop back and things to do as a team."

Although reigning champions Central Coast will start as favourites when they arrive at Hunter Stadium this weekend, Jaliens believes the onus is on the home side to take the initiative against Graham Arnold's well-drilled outfit.

"Derbies are always special, especially when you play at home because you want to win for the fans and for the city and this is what we want to do," the Dutchman said.

"From our point of view we have to show our game and we play at home so we must be the team to decide what's going on, on the pitch."