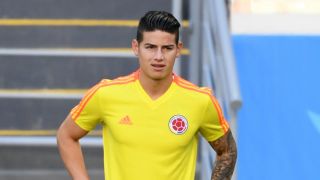 James Rodriguez has been left out of Colombia's starting line-up for their World Cup opener against Japan after failing to recover from a reported calf strain.

The Bayern Munich loanee has been receiving treatment in the last week in a race to be fit for the game in Saransk but was named as a substitute by Jose Pekerman.

The absence of the 26-year-old, who won the Golden Boot at the 2014 World Cup after scoring six times, is a blow to Colombia's hopes of a positive start in Group H, having qualified for consecutive tournaments for the first time in 20 years.

Juan Quintero starts in the number 10 role behind striker Radamel Falcao, with Jose Izquierdo and Juan Cuadrado named on the wings.

James scored seven times in 23 Bundesliga appearances for Bayern in 2017-18, having joined on a two-season loan deal from parent club Real Madrid.