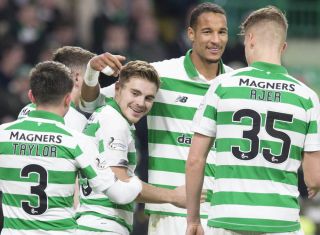 Celtic manager Neil Lennon hailed “priceless” winger James Forrest after he celebrated his new contract with the second goal in a 2-0 victory over St Mirren.

Forrest extended his contract by a year to 2023 and then netted a smart finish in the 54th minute, five minutes after Mohamed Elyounoussi had opened the scoring on the rebound.

Lennon, who handed Forrest his debut in 2010, said: “He was brilliant. We gave him a new deal and I don’t care how much we pay him, he is priceless to me. That’s 10 goals he has got.

“His inventiveness, intelligence was there for all to see. It was a brilliant goal and his all-round game was exceptionally high again.

“He is in his peak years, it’s 10 goals already only a quarter of the way through the season. That’s a great return for a wide player.

“What would he cost? A goalscoring winger who has been doing it for 10 years consistently, treble player of the year, international player of the year – start the bidding at £25million. That’s what I would ask for anyway.

“He’s not going anyway, we have got him secured. I was asked earlier if I was surprised there has been no interest in him. I’m sure there has been. He has never wanted to leave or knocked on anybody’s door.”

Lennon played down an injury which forced Scott Brown off with Saturday’s Betfred Cup semi-final against Hibernian to come.

“He tweaked his thigh,” Lennon said. “He is not feeling too bad, he came off more or less straight away so there wasn’t any danger of making it worse.

“We will have to see how it settles but we are hoping he will be OK.”

There was worse news earlier after striker Bayo underwent a scan on a knee problem.

“It’s not good,” Lennon said. “He may require surgery. He is seeing a specialist on Monday. If he does need surgery we are looking at maybe six weeks.”

Celtic stayed top of the Ladbrokes Premiership by one goal from Rangers and Lennon was satisfied.

“It was a difficult game, difficult opponent, difficult circumstances with the intensity of the last few days,” he said.

“Sometimes psychologically they are the most difficult games, and you could see that first half, we were a little bit hesitant, although we still created some decent chances.

“But the response after half-time was fantastic and my only gripe was we didn’t win the game by a few more.”

St Mirren manager Jim Goodwin was frustrated to see the game suddenly go out of sight.

“The first half was satisfying in terms of what we set out to do – be compact and not let Celtic play through us as they like to do, and try and hit them on the break,” he said.

“I thought we did that to a certain extent, Vaclav (Hladky) wasn’t as busy as maybe people would have expected, I don’t remember many saves.

“We asked for a repeat performance and unfortunately we just didn’t start the second half in the manner we should have.

“The first goal was a bit unfortunate but the second was really disappointing because we could have defended it better on a number of occasions.”