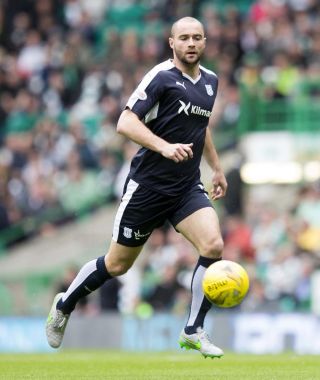 James McPake claims putting his name forward for the Dundee manager’s job would be disrespectful given the debt he owes to the club.

The former Dundee skipper, who was forced to retire prematurely because of a knee injury, has stepped into a caretaker role after the sacking of Jim McIntyre on Sunday.

But the under-18s coach is purely focused on Saturday’s visit of St Mirren rather than talking up his own prospects of leading the club in the Ladbrokes Championship next season.

“What it has done for me in almost five years I’ve been here, I don’t know what I’d need to do to repay it in terms of, first of all, signing me when I hadn’t played in six months at Hibs due to my second back surgery.

“They took a massive gamble on me to bring me here. I’m still here. And a couple of years down the line I suffer another injury and they look after me the best possible way they could.

“They went above and beyond what I could ask a football club to do for me and my family. Whether that was going to see whatever surgeon I wanted, getting me any treatment I wanted.

“So for me to even think about that this week I think would have been disrespectful to the football club and the fans.

“Obviously it goes through your head, but I genuinely mean it when I say that all I’ve thought about this week has been the St Mirren game.”

St Mirren need to better Hamilton’s result against St Johnstone to avoid a relegation play-off but Dundee are also desperate for points having not yet won at home in 2019.

McPake said: “It has been hectic. It is a good hectic. I’ve been used to that side of football for years when I was in it in the lead up to a game.

“So I’m just enjoying the moment and that’s what is getting me through the week and I can’t wait for Saturday.”