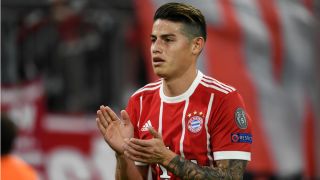 Bayern Munich executive chairman Karl-Heinz Rummenigge insists that James Rodriguez will remain with the German champions despite rumours of a return to Real Madrid.

Rodriguez, 27, joined Bayern on a two-year loan deal ahead of the previous campaign, with the Bundesliga giants having the option to purchase him outright for a reported €42million in 2019.

However, rumours have suggested Madrid could recall the Colombian following Cristiano Ronaldo's move to Juventus. Rummenigge, though, has dispelled those fears.

"The contract situation is well known, many things coming from Spain may not necessarily be true," he told reporters on Friday.

"I can say for sure that this season - and I'm assuming it goes beyond that - James will play at Bayern."