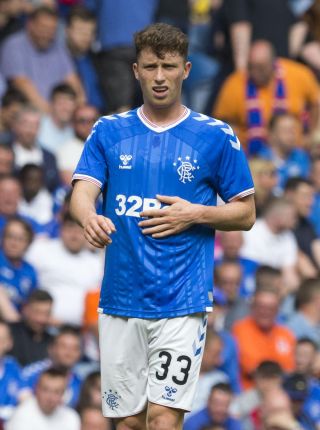 Jamie Barjonas has targeted a return to the Rangers first team after extending his contract.

The midfielder has been handed an extra year on top of his current deal, which had been due to expire at the end of this season.

The 20-year-old made the most recent of his nine Rangers first-team appearances in December 2017 and spent last season on loan at Bury and Raith.

But he was promoted to the first-team dressing room and training sessions after working hard on his fitness over pre-season and he is now looking to kick on again.

Barjonas told Rangers TV: “I worked really hard in the off-season so coming back in June I had got my body in really good physical shape.

“I knew that technically I was good enough so it was just about the fitness and the body fat side of things so I had done really well.

“This season has been good for me, I had a strong pre-season so the gaffer moved me up to the first team and I am really enjoying every minute of it.

“The manager has said he has been really pleased with me since coming back in pre-season and said I worked really hard.

“He said I deserve the contract and they want to give me another year, so for me, it is another opportunity to improve and impress.

“It gives me another year to get to where I want to be, which is playing with Rangers’ first team.”