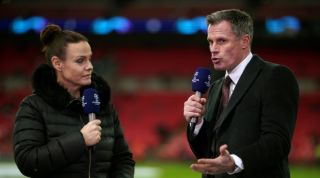 The two Premier League title rivals go head-to-head at Anfield on Sunday, with Jurgen Klopp’s side currently six points clear at the top of the table.

Pep Guardiola led City to their second consecutive title last term by finishing one point ahead of the Reds in an enthralling title race.

But the Merseyside club tasted glory of their own by lifting the Champions League, with the Citizens getting knocked out by Tottenham at the quarter-final stage.

And former Anfield favourite Carragher believes that the intense competition between the two sides in recent years has caused a rift off the pitch.

“I do not believe I am exaggerating when I say the hierarchies of Liverpool and City cannot stand each other, resentments which are reflected in the fanbases,” he wrote in the Telegraph.

“City appear to suspect Liverpool of lobbying governing bodies to investigate the legality of their transfer spending, while they make no secret of their belief that the positive coverage of the Klopp era is disproportionate when compared to Guardiola’s trophy haul, and City’s in general since the Abu Dhabi takeover.

“Within Liverpool, eyebrows are raised when stories emerge about fears of another attack on City's bus as happened in the Champions League quarter-final in 2018, and there was incredulity at Guardiola's comments about Sadio Mane's diving.

“As Klopp suggested, it certainly feels like Guardiola talks about Liverpool more than Klopp does Manchester City, and City generally seem preoccupied with how Liverpool are portrayed in the media.”

EXCLUSIVE James Milner interview: "We don’t want to be remembered as the team that won the Champions League once"

QUIZ! Can you name the last 50 players to score in games between Liverpool and Manchester City?