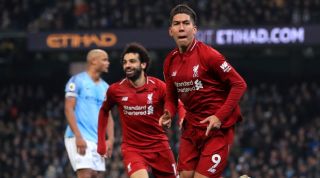 We've included the club each player scored for and the month in which they scored (a couple of players have scored for both teams in the fixture, but unfortunately you don't get any extra credit for naming them). We've also left out those players who scored own goals, because we're feeling generous. You've got 10 minutes to name them all. Don’t forget to tweet your score to @FourFourTwo when you're done - but don't give away any of the answers.

QUIZ Can you name the 25 teenagers to appear in the Premier League so far this season?

The last few years have seen Manchester City and Liverpool face off plenty of times as they continue to battle it out as the two best teams in the Premier League, but it hasn't always been that way.

Both teams have had their time away from the title race, and the fixture often hasn't carried the same gravity it has today.

We thought we wouldn't have to go too far back to find the last 50 goalscorers in fixtures between the two high-flyers. However, due to a lot of repeat goalscorers and a few low-scoring games - including a run of six matches where the two clubs scored just four times combined - we've had to go all the way back to 2001.

ANALYSIS The Liverpool comebacks – how do they force opponents into late errors so often?