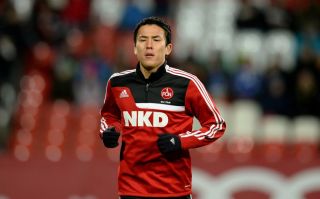 Hasebe has been on the sidelines since January after sustaining a torn lateral meniscus in his right knee.

The midfielder has undergone two surgeries to try and remedy the problem, but was a frustrated spectator as he watched his Nuremberg team-mates lose 2-0 to Mainz in a defeat that furthered their relegation worries.

The 30-year-old revealed that he is making progress in his recovery, but still has no timescale for his return.

"I guess everything is going well (but) I cannot play yet," told the Kyodo news agency in Japan. "I don't know when I will be returning."

Japan have been drawn in Group C for the World Cup, and will take on Ivory Coast in their opening match on June 15 before facing Greece and Colombia.