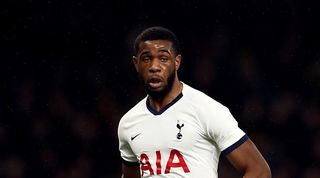 Jose Mourinho has hailed Japhet Tanganga after another impressive performance against Middlesbrough.

Tanganga was handed his full Tottenham debut in Saturday's 1-0 defeat by Liverpool in the Premier League.

The defender then kept his place in the starting XI for Tuesday's FA Cup third-round replay against Boro, which Spurs won 2-1.

And Mourinho says he "trusts" the 20-year-old and praised the way he has made the step up to the first team.

"I trust him. I know the way he can read the game and learn," Mourinho told BBC Sport.

"He absorbs all the information. He is not that kind of modern kid who is worried with pathways, the pathways it to work hard and take the opportunity which he did. Now people know how good he is."

Spurs were dominant in the first half on Wednesday and deservedly took a two-goal lead through Giovani Lo Celso and Erik Lamela.

However, they allowed Middlesbrough back into the game and were left holding on to a slender advantage in the closing stages.

"Three-nil was so close so many times. I told my players at half-time if we don't score [to make it] 3-0, then if it went 2-1 we would be in trouble and it happened.

"We knew the opponents were hard. They brought on Gestede and went direct and made problems and when it was 2-1 we knew it was going to be difficult.

"We tried our best. The boys are trying their best. They dealt well with many set-piece situations. We did lots of things well. We conceded the goal, a bit frustrating, but more frustrating was that we did not score three, four or five."

Tottenham return to action in the Premier League on Saturday when they face in-form Watford at Vicarage Road, before a home clash with Norwich next Wednesday.