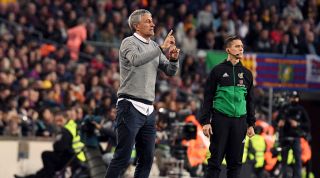 Ernesto Valverde’s time asBarcelonamanager is up. It’s been a curious spell for Barça - two consecutive league titles have been clouded by two spectacular Champions League capitulations to Roma and Liverpool - but as the club look to snatch a third title in a row (they are currently top of La Liga), in steps former Real Betis manager, Quique Setien.

A chess lover, a Messi enthusiast and an apparent collector of Sergio Busquets memorabilia, here’s everything you need to know about the new head honcho at the Nou Camp.

Quique Setien had a more modest footballing career in comparison to some of Barcelona’s past coaches. Fair enough, really - since he’s competing with Cruyff and Rijkaard on that front - but Setien is a cult figure back at Racing Santander, playing over 300 times for his boyhood club across two spells. He made it to the 1986 World Cup too for Spain, but never left the bench.

Like Guardiola, Setien was a central midfielder in his youth. Nicknamed ‘El Maestro’, the Cantabrian was a good controller in the centre of the park, earning a move to Atletico Madrid in 1985.

Setien was no doubt seen a perfect fit for the Barcelona job thanks to his respect and admiration for Cruyff. “I remember when Johan Cruyff’s Barcelona came along,” Setien reminisced. “You played against them, and you spent the whole match running after the ball. How can you get a team to have the ball permanently, so that the opponent is running after it for the whole match?”

This epiphany, he claims, led him to analyse football a little deeper and develop a ball-oriented style of play as a coach. He’s a huge fan of Cruyff disciple Pep Guardiola too, noting that the City boss is “a reference for thousands of coaches all over the world.”

Unsurprisingly, he’s admitted he’s not a fan of Atletico’s Diego Simeone’s brasher, more conservative style. “I told that to Cholo,” Setien once said. “I love what you do, the titles, what you have achieved... but I don’t like how your team plays.”

A fan of Messi

There’s no mistaking Quique Setien’s opinion when it comes to the Ronaldo vs Messi debate.

The new Barça coach calls Messi “the best player in history”, so it’s likely that the Argentine will be a big part of Setien’s plans (as if that was at all in doubt). “When a player like Xavi retires, it's as if a kidney is removed,” Setien once claimed. “And the day that Messi retires, I will cry forever.”

Say it with your chess

It seems strange to think of any football manager having many hobbies outside of constant tactical tweaking of their team, but Setien’s past-time plays into his career.

A big lover of chess, El Maestro doesn’t just dabble, he’s played against world champions Garry Kasparov and Anatoly Karpov. Setien claims that chess has been vital for him in understanding patience and control in sport, and it feeds into his football. His teams have specific moves and automatisms on the pitch - as if he sees the game like a giant chequerboard - and giving the coach his propensity for remaining one step ahead of his opponent.

Over a year ago now, ahead of a clash between Setien’s Betis side and Barcelona, the Cantabrian asked Sergio Busquets for his shirt. Busquets obliged, signing it with “For Quique with appreciation and admiration for your way of understanding football. A hug.”

If the endorsement of Busquets is anything to go by, the Barça players will certainly enjoy Setien’s brand of football a lot more than Valverde’s. Setien’s “way of understanding” in fact led to a 4-3 victory, on the day that Busquets gave him his shirt.

Whilst Ernesto Valverde was seen as a pragmatist and often favoured two blocks of four, Quique Setien’s ideals are shaped by his desire to control the game, claiming “I understand football through the ball”.

Setien favoured a 3-4-2-1 and a 4-3-3 while at Real Betis, which should be two templates he’ll take to the Nou Camp. His football at the Seville-based club was seen as high-risk but high-reward; he used a high line and would build from the back even under the most ferocious of presses.

He used a defensive midfielder to drop into a false back three - a potential role for either Sergio Busquets or Frenkie De Jong - and he favoured full backs pushing very high; former pupil Junior Firpo will be key to his Barça revolution.

He’s now the line manager for employees worth nine figures, but prior to joining Barcelona, Quique Setien’s record transfer was for William Carvalho - a rumoured £18m, to be precise, for the Portuguese’s fee.

Carvalho was a rock in the Betis side and suggests that Busquets will be a favourite of the new manager, but there were other notable midfielders under his command too. Giovanni Lo Celso flourished under Setien after seeking more game time away from PSG, developing his game significantly. And Fabian Ruiz was an all-action playmaker for Betis before Napoli triggered his €30m release clause, impressing in Setien’s side by orchestrating play in across the pitch.

Interestingly, Barça could perhaps do with Fabian’s drive from midfield right now. Could a bid be imminent?