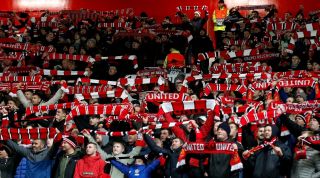 The chants from the Stretford End against the Glazers and Ed Woodward on Saturday – the first time they have been properly heard at Old Trafford this season – weren’t pre-planned, but spontaneous, and came when the team was comfortably in the lead against Norwich City.

They started in the Red Army section and spread from there. This was at the end of a week when Manchester City had shredded United in an awful first half at Old Trafford. Fans were frustrated by that showing, just as they were when those songs were sung in the bore draw at AZ away in September or the defeat at Newcastle a few weeks later.

No, nobody thinks that Ed Woodward is really going to die any more than they thought that Roy Keane wore a ‘magic hat’, that Nemanja Vidic was a murderer or Bertie Mee asked Matt Busby if he’d heard of the North Bank at Highbury. Woodward could walk through the crowd at the next game and be fine, though he’s been challenged a couple of times at previous matches. In Belgrade, one respected and fully refreshed Red had a go at him and vented his wrath. Woodward invited him into Old Trafford to talk before a subsequent game.

It’s not difficult to see why people started singing in protest. Manchester United continue to be inconsistent, fifth in the league and no closer to a title challenge than they were when Woodward took the top job. City and Liverpool being English and European champions doesn’t help, nor does the fact that United have a higher wage bill than both.

The Glazers are unloved, just as previous owners were. “Martin Edwards, you’re a wanker,” was a popular chant on the Stretford End of my youth. He’s the man who took United public in 1991 and anyone could’ve bought shares for a float which was heavily under subscribed. I’ve spoken to Edwards many times since. He admitted that he got communication with fans badly wrong and that he shouldn’t have put an area of executive seating in the middle of Old Trafford’s most iconic stand. Edwards still goes to games, still pores over statistics and buys every single United book.

David Gill and Peter Kenyon were unpopular, despite Gill being well respected by employees and in football generally. Gill’s early communication with the support was encouraging, then he cut it after the Glazer takeover. That was big mistake. Ticket prices shot up in those first five years under the Glazers and Gill but they’ve been stationary for a decade now and there has been a genuine attempt to open a dialogue with supporters. It’s one reason the Red Army group came into being and there are a lot of decent people who work at the club who do care about the atmosphere as much as the fans – because they’re fans too.

The Glazers will never be popular. They took charge for financial gain in a takeover that was entirely legal but ethically screwed and allowed to go through by weak British governance. They’ve been there 14 years now and the trophies have dried up.

You can’t accuse the Glazer of profligacy when it comes to the team, but hundreds of millions have been squandered on players who’ve not delivered. Each, incidentally, was welcomed by the fans, though United’s recruitment was slipping well before Woodward came along. Ronaldo and Tevez were replaced with Michael Owen, Antonio Valencia, Gabriel Obertan and Mama Biram Diouf. That said, United still carried on winning titles while their players continued to speculate just how much City were really paying Tevez.

City’s sovereign wealth has compacted United’s problems, but Liverpool are also owned by American arch-capitalists like United. They’re in debt like United too, and they’re the best team in the world. Unlike fans of any other club on the planet, Liverpool’s have deeper, almost spiritual level of connection to their team. It’s almost like it really means more.

But every dog has its day, and let’s forget them until Sunday when United take more points off them at Anfield.

I interviewed Woodward face-to-face in October and put the exact same challenging questions to him which I’d ask if I were interviewing him tomorrow, be it about a director of football, investment in youth or any stadium redevelopment. He spoke for an hour and a half. Readers didn’t have to agree with his answers any more than I did, but some light was shed. He admitted errors in recruitment, communication and that he’d made errors in some of the previous things he’d said. He was adamant that a successful United is the best way for a profitable United. And United, commercially, remains the best. It’s how that money is spent which is the problem and United fans hardly celebrated when Woodward was lavishly renumerated for his work.

I asked him about the speculative talk of a Saudi takeover. He said the Glazers have no plans to go anywhere.

And why would they? They took a massive mortgage out to buy a mansion and that house is their cash cow and continues to increase in value as a business.

But what’s the solid alternative right now, with the club valued around $4 billion? A takeover with Saudi or Chinese money? As if that would be a panacea. The truth is that United, like Barcelona or Real Madrid, don’t need to be owned by anyone. Taking a billion out of the club as the Glazers have is like putting bricks onto the back of a swimmer.

The ownership issue comes and goes – and would never have even started had Sir Alex Ferguson not got into a row about a horse. It was at its most pertinent in 2005 when protesting fans tried to stop the takeover, when FC United was formed (my brother was one of their first signings and dropped down five divisions to play/drink with FC) and when a group of us travelled to see the UK government to be met with a (sym)pathetic ‘Yes, we know it’s wrong, but there’s nothing we can really apart from write a strongly worded letter’. That made a huge difference as you can imagine. We’re in a capitalist system where football clubs in the UK are unprotected from takeovers. That’s why you see the current make up of global owners at Premier League clubs.

There were the green and gold protests a decade ago as the Glazers tried to ride the global credit crunch with a series of costly re-finances of the debt, though those scarves soon became de rigeur among tourists who were paying a fortune into the club – and to the Glazers. Mancunians grafters did well out of it, too.

There are so many contradictions. One fan who was big on the green and gold protests saw the Glazers pre-season in America – and asked for a photo, for which they were happy to oblige.

United’s fan base is split, not so much among match goers but between those who go and those who, for whatever reason, don’t. Fans at matches don’t like being told how to protest by fans who watch their football on screens. The situation is laced with irony. Those fans who sang on Saturday had paid to be inside Old Trafford, which continues to be full for league games.

Fans are loyal, yet fickle too. There was no dissent after United won in Paris last March. Many fans are understandably only arsed about winning. That was the United they signed up for and they’re vexed when it doesn’t happen – just like fans of the other global super clubs.

The Glazers could help themselves. Doing media is not a good idea since fans won’t buy what they have to say. And what could they say? Everyone knows they’re in it for the money.

But seriously investing in and expanding the stadium would show a level of commitment. It would be a medium-term investment rather than short-term money-grabbing.

The best way they can help themselves is for United to start challenging for and winning league titles again. That’s the acid test. It’s not going to happen this season and probably won't next, but fans who’ve backed Ole Gunnar Solskjaer and the idea of promoting young players, not changing the coach every two years and buying overpaid underperforming ‘stars’ pushed by their agents, need to see improvements over 2020. Because if United are unable to put a decent run of wins together or keep losing to the bottom teams and are fifth and sixth by the end of this year, then you’ll see dissent that goes beyond a few off the cuff songs.

While you're here, why not take advantage of our brilliant subscribers' offer? Get the game's greatest stories and best journalism direct to your door – just £3 for the first three issues. Cheers!

IN THE MAG Euro 96 special! As told by Venables, Anderton, Southgate, Shearer, Poborsky and more