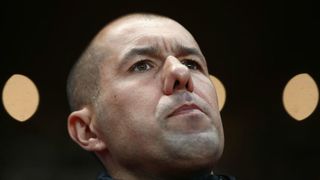 Leonardo Jardim warned against complacency after Monaco's 3-0 victory over Nancy took them to within touching distance of the club's eighth Ligue 1 title.

Monaco's superior goal difference to Paris Saint-Germain means they will all-but seal the title with another victory.

On a wet evening in Lorraine, Nancy's artificial playing surface wasn't enough to cause a slip-up as Monaco brushed aside a team fighting a relegation battle, although the visitors were given the ideal start when defender Tobias Badila scored an own-goal after three minutes.

Bernardo Silva added Monaco's second and Thomas Lemar struck four minutes from time, leaving Jardim to reflect on a strong performance from his side.

"We had a serious game," he told reporters. "All players gave the maximum. I'm very happy with the performance.

"We are each time closer to our goal but nothing is done. We need to stay focused."

Monaco face a trip to Turin for the second leg of their Champions League semi-final against Juventus before they take on Lille, Saint-Etienne and Rennes in their last three league games.

Juventus lead the semi-final 2-0 after their first-leg triumph at Stade Louis II, but Jardim refused to rule out a comeback.

He said: "Every competition is different. Now, we can think of the second leg of the Champions League.

"In the face of the Juventus, we must be confident, even though we know it will be very difficult.

"We will try, try to play, and if we score a goal, you never know."

Nabil Dirar, who had a hand in creating Monaco's third goal against Nancy, indicated that he and his colleagues recognised that their title campaign is not yet over, saying: "We won three points tonight. We have three finals to play."