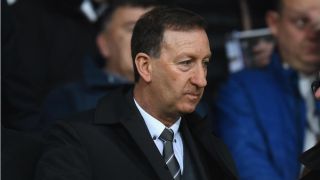 Monk parted company with Swansea in December following a run of one win from 11 Premier League matches.

Club stalwart Alan Curtis has been in temporary charge at the Liberty Stadium for the five subsequent league matches, winning once, and on Thursday it was confirmed the 61-year-old would remain in the role until the end of this season.

Following Monk's departure, Swansea were linked with moves for a number of high-profile coaches – most notably ex-Chile and Athletic Bilbao boss Marcelo Bielsa and Brendan Rodgers, who guided them to the Premier League before leaving for Liverpool in 2012.

In a statement on the club's official website, Jenkins explained that the slump under Monk – who secured Swansea's highest Premier League finish of eighth last season – took the board of directors by surprise.

"I know some people will query why we didn't have a replacement lined up when we parted company with Garry Monk, but we didn't expect to be in the situation we were in when you look at our position mid-September," Jenkins said.

"We hoped and expected things would eventually turn around. When they didn't, we felt we had to act quickly in the best interests of the club going forward.

"Finding a replacement hasn't been easy because we didn't want to make a short-term decision that would be detrimental to the club long-term. It's a unique situation for us and I think we are only now appreciating what other Premier League clubs in our position have gone through in the last five years."

Jenkins revealed Swansea spoke to "a lot" of managers, including some currently in work, but conceded that his club being fourth bottom of the Premier League and two points above the relegation zone made them a tough sell.

He added: "We've spoken to a lot of potential managers. Some didn't want to leave the clubs they were at this late stage in the season, while others didn't want to put their reputation on the line by joining a club at the wrong end of the table.

"In the end, we felt the best decision was to keep things in-house and change as little as we can until taking stock in the summer.

"Bigger clubs than us have gone through difficult times. We haven't had many tough times in the last 12 years, but now it's about how we come through this period that counts. We need to make sure we stick together as players, staff and supporters and give everything as one."