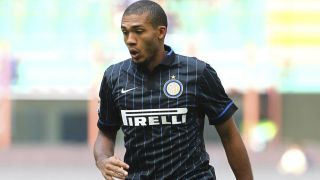 Juan Jesus should complete his move to Roma on Thursday after arriving at the team's pre-season training camp in Pinzolo.

The Brazilian defender is widely expected to join the Giallorossi on loan with a view to a permanent move, with an option to buy for a reported €10million .

Jesus' impending departure was acknowledged by Inter on Wednesday in a tweet wishing him well.

And Roma followed up by announcing his arrival at the club later that evening.

"On Wednesday afternoon defender Juan Jesus left Inter's pre-season base in Riscone di Brunico and, at around 2330, arrived at Roma's training camp in Pinzolo," said a statement on the club's website.

"The Brazilian met coach Luciano Spalletti at the team hotel".

Jesus has spent the last four-and-a-half years with Inter, having arrived from Internacional in his homeland.

He made 142 appearances in all competitions for the club.