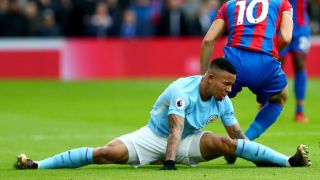 Gabriel Jesus will not require surgery on what the Manchester City star has said is a "small" and "not very bad" medial collateral ligament injury.

The Brazilian youngster overstretched during the first half of City's 0-0 draw at Crystal Palace on Sunday, accidentally doing the splits.

Although he did not need to be taken off on a stretcher, Jesus did limp off the pitch in tears and coach Pep Guardiola said after the match that he could face up to two months out.

City confirmed on Monday that Jesus had suffered MCL damage, but the player took to his official Instagram account soon after to allay fears of a lengthy lay-off.

He wrote: "Today I went through an image exam on my left knee that diagnosed a small medial collateral ligament injury!

"Thanks god it is not very bad and I won't have to go through any surgery procedure. Promise to be back as soon as possible!

"Thanks for all the fans support and positive thoughts! Happy new year! 2018 is going to be my year!"