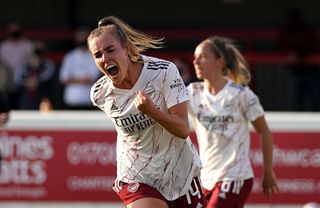 Vivianne Miedema scored twice with Kim Little, Beth Mead, Leah Williamson and Caitlin Foord also on target for the irresistible Gunners, in front of a crowd of nearly 1,000 at a pilot event for the reintroduction of spectators.

Kenza Dali at one point equalised for the Hammers but their hopes disappeared once they had Gilly Flaherty sent off in the first half.

But seriously, though… we were running out of space on this graphic 😳 https://t.co/rRPxrdoIgN— Arsenal Women (@ArsenalWFC) September 12, 2020

Having scored a hat-trick in Arsenal’s 6-1 win over Reading last weekend, Roord opened the scoring 22 minutes into the match when she connected perfectly with early substitute Katie McCabe’s low cross into the box.

West Ham’s top scorer last season, Dali, equalised with an incredible strike from the edge of the box in the 26th minute, punishing Arsenal for failing to make the clearance seconds earlier.

But seven minutes after the equaliser, England international Mead set up Holland’s all-time top scorer Miedema for her first goal of the match, a minute before West Ham’s captain Flaherty received her second yellow card for dissent.

Failing to compose themselves after the red card, West Ham conceded two more goals before half-time as Little and Mead got in on the fun.

Roord scored her second goal in the 51st minute with Miedema adding her second four minutes later, and there was no stopping Roord as she completed another hat-trick in the 57th minute before being substituted.

Defender Williamson made it 8-1 to the Gunners with a close-range shot in the 71st minute, with team-mate Foord scoring her first WSL goal five minutes from time.