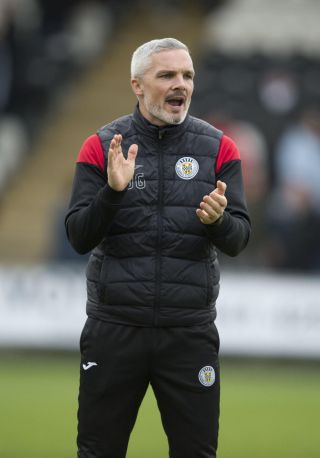 The 21-year-old centre-back was being courted by several unnamed English clubs but opted for a tilt at the Ladbrokes Premiership.

McCarthy signed a two-and-a-half year deal with the Buddies and speaking at their training ground, he outlined Goodwin’s part in the move.

He said: “I had a few other English clubs interested but St Mirren kind of showed me a bit more care as a player, did things other clubs wouldn’t necessarily do.

“The manager would pick me up from the airport, drop me off at my hotel and made sure everything was settled for me.

“Just things like that. I think that just ticked a lot of boxes for me.

“He’s been ringing me almost every day just to see if I need anything and I can’t speak highly enough of him at the minute.

“He’s been very good with me and I want to repay him for bringing me to the football club.

“Don’t get me wrong, I’ll have to compete for my place but the fact the manager said I’ll be given an opportunity here really enticed me to come to the football club.”

Goodwin has moved relatively early in the transfer window to bolster his squad which was shorn by loan defender Sean McLoughlin’s return to Hull.

Attacking midfielder McGrath, 23, joined from Irish champions Dundalk where he was out of contract, also on a two-and-a-half year deal.

Norwich City centre-back Akin Famewo, 21, signed on loan until the end of the season.

Goodwin said: “The two guys we brought in from Ireland, we tried to do something with them in the summer, midway through the season in Ireland but we weren’t able to do that.

“We had planned and prepared for those ones anyway, we had the agreements in place, thankfully as soon as the window opened we were able to get those ones over the line.

“We always knew that we ran the risk of losing Sean McLoughlin and we had contingency plans in place.

“We watched Akin a number of times and we thought he would be an ideal replacement for Sean; very similar, strong, quick, left-sided.

“He was captain of their under-23 team at Norwich so he has those leadership qualities as well.”