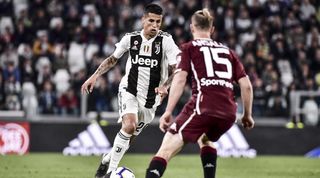 The Premier League champions are in the market for a right-back this summer with Danilo looking set to depart the Etihad.

A report in Goal says that City have started negotiations for the €50 million capture of the 25-year-old.

Juve’s shortlist of potential replacements includes Trippier, Napoli’s Elseid Hysaj and even City defender Danilo, who was close to joining the Serie A side in 2017 before moving to England.

However, it appears that any move for the Brazilian would involve a separate deal, as a cash-only transfer is the only option being discussed between the two clubs for Cancelo.

Aaron Wan-Bissaka of Crystal Palace, a target for Manchester United, was another option being looked at by City in their hunt for a new full-back.

Cancelo is understood to be interested in moving but Juve are pushing for more than €50 million and an agreement is yet to be struck.