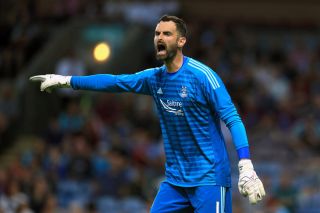 Aberdeen goalkeeper Joe Lewis admits he is baffled by the sectarian issue in Scottish football.

Dons boss Derek McInnes was sent off for reacting to “sad orange b*****d” chants from Celtic fans with a gesture in the 3-0 William Hill Scottish Cup semi-final defeat on Sunday.

The Pittodrie men trailing from goals from James Forrest, Odsonne Edouard and substitute Tom Rogic before defender Dominic Ball, midfielder Lewis Ferguson, and assistant manager Tony Docherty were all sent off as McInnes’ frustrations boiled over.

The former Rangers midfielder was also dismisseed by referee Craig Thomson and afterwards he revealed that the match delegate had included the sectarian chanting in his report.

It  remains to be seen what action if any will be taken by the authorities but asked about the incident and that type of abuse from the stands, Englishman Lewis said: “It is baffling to someone who has not been brought up with that culture but it is a culture that is set in around here.

“It needs strong action to change that. But we won’t hold our breath for it.”

Lewis, 31, stressed the importance of next week’s Ladbrokes Premiership clash with Kilmarnock.

The Dons are sitting in fourth place, behind Killie on goal difference, with five games remaining.

“The next game is huge and we are the ones that need to step up and make the difference and get rid of this disappointment as soon as we can and be as strong as we can and be real adults about it. Don’t sulk.

“Come Saturday it is going to be another battle and we need to be ready for it.

“If you are not disappointed after a game like that it is not natural but you need to be adults and get on with it and that needs to start on Saturday.”