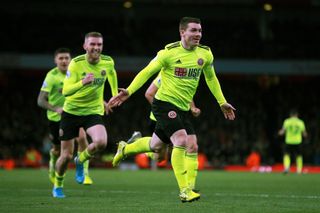 John Fleck struck a late equaliser as Sheffield United came from behind to seal a Premier League point against a frustrated Arsenal.

Gabriel Martinelli’s ninth goal in 10 Arsenal starts appeared to have the Gunners on course for a win but Fleck struck with seven minutes remaining to secure a 1-1 draw for the visitors.

Arsenal head coach Mikel Arteta was without captain and top goalscorer Pierre-Emerick Aubameyang, who watched from the stands as his replacement Martinelli scored at the end of a quiet first half.

He even tweeted that he saw Martinelli, 18, as a future “superstar” as the Brazilian and Bukayao Saka – three months his junior and playing out of position at left-back – were Arsenal’s best players.

But, as they have struggled to do for some time, the hosts could not see out the contest and had to settle for a share of the spoils which sees them ninth in the table and four points adrift of the Blades.

It was a nervy start at the back for Arsenal, with recalled Shkodran Mustafi losing possession on the touchline and Lys Mousset sending a good headed chance wide.

Arteta’s side were almost playing on the counter-attack in the opening exchanges, relying on the pace of Nicolas Pepe and Martinelli to get them in behind – the pair combining for the latter to shoot off-target.

Martinelli then fired wide having been slipped in by Pepe once more as the Gunners looked to show they could cope with losing their go-to goalscorer.

It would be Martinelli, the only man close to Aubameyang’s numbers so far this season, who opened the scoring in the final minute of the first-half.

The 18-year-old drifted into the middle unmarked to turn Saka’s deflected shot in from close range.

The visitors were almost gifted an equaliser 10 minutes after the interval, Bernd Leno getting nowhere near a corner and Granit Xhaka having to hack Billy Sharp’s effort off the line – with Sheffield United’s players bellowing for handball against the midfielder.

A VAR check cleared Xhaka but Chris Wilder’s side began forcing the issue in the search for an equaliser.

The video referee then sided with on-field official Mike Dean – taking charge of his 500th Premier League game – and did not award a penalty to Arsenal even though Pepe appeared to be tripped.

Arsenal were struggling to create openings to secure the points and were lucky to see an unmarked Oli McBurnie head straight at Leno with 10 minutes remaining.

But their luck ran out soon after as Sharp flicked a Callum Robinson cross into the path of Fleck, whose shot into the ground flashed into the corner of Leno’s net.

Mustafi’s late header could not test Dean Henderson in the United goal as the game ended in a draw.