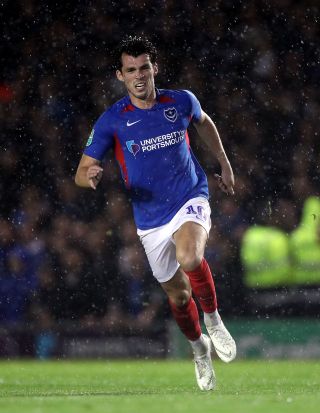 John Marquis feels he has plenty to prove when Portsmouth take on Oxford in Friday’s first leg of their Sky Bet League One play-off final.

Marquis, by his own admission, has not set the world alight since arriving at Fratton Park for an undisclosed fee from Doncaster last summer.

He has scored nine goals since the turn of the year, but is determined to end the season with a bang by helping Pompey return to the Championship.

“It would be massive,” the 28-year-old striker told the PA news agency.

“My aim when I signed for Portsmouth was to get promoted and if I can do that in my first season it would be fantastic.

“So I’m hoping to put in better performances and get the goals in the play-offs that will hopefully send us up.”

💙 "I want to thank the fans for the sacrifices they've made during this pandemic"— Portsmouth FC (@Pompey) June 29, 2020

Pompey have been inactive since football was suspended in March before clubs in Leagues One and Two voted to curtail their regular seasons earlier this month.

“It’s been very difficult, very different to what we know as players, your standard August to May season being thrown out of the window,” he said.

“Obviously there’s a bigger issue going on in the world right now with what’s going on with coronavirus, but we’ve had to stay ready.

“They’re two, hopefully three, massive games, which give us an opportunity of being a Championship team next season.”

London-born Marquis has twice won promotion from League Two, with Northampton in 2016 and Doncaster the following season, while Portsmouth are working their way back up after spending four years in the bottom tier until 2017.

Pompey’s bid for back-to-back promotions last season ended in a play-off semi-final defeat to Sunderland and Marquis’ last kick of a ball for Doncaster was in the other League One play-off semi-final, which Charlton won on penalties.

His spot-kick was saved in the shootout after he had earlier scored in extra time to put Doncaster ahead on aggregate before Darren Pratley struck for Charlton a minute later.

“If it was to go to a penalty shootout this time I’d be the first one to put my hand up and take one,” Marquis said.

“You learn from the experiences you come across and you just have to embrace the moments.

“Any play-off is a roller-coaster. We’ve worked so hard for them this season and form goes out of the window, especially in the situation we’re in now where teams haven’t played for a while.

“But if we play to our full capabilities we’ll give ourselves a fantastic opportunity and it will be up there with some of the best memories of my career so far if we can do it.”