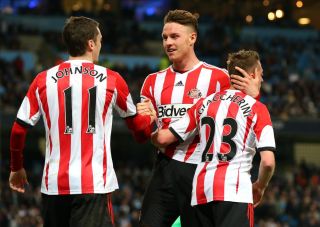 A 1-0 defeat to Everton at the Stadium of Light on April 12 marked a seventh defeat in eight top-flight matches for Gus Poyet's men, a run that had seemingly ended their survival hopes.

However, Sunderland responded with superb performances against title-chasing Manchester City and Chelsea, drawing 2-2 at the Etihad Stadium before beating the latter 2-1 at Stamford Bridge and following that with a 4-0 rout of fellow strugglers Cardiff City on Sunday.

That upturn in fortunes has seen Sunderland move out of the relegation zone and has been in no short part down to the form of striker Connor Wickham, who has scored five goals in three games, while Fabio Borini has notched from the penalty spot in the last two matches.

Johnson believes that Sunderland have been overly reliant on individual performances in the past, but now a collective attacking effort is helping the team reap rewards.

"I think it's important to not just have one threat. Even if you look at the top teams, they have an individual, but if he is not doing it one day or getting marked out of the game, there's always somebody else to do it," he told The Shields Gazette.

"Relying on one or two people is difficult in a team of 11. Teams are just going to pinpoint one person, and think if he doesn't play, the team won't.

"I think that's probably been our trouble throughout the season, we haven't had enough people on it at once."

On Wickham's contribution, Johnson added: "Connor's a threat and he's a big lad. He's tough to play against.

"In the last couple of games, I think he's just gone back to basics - held it up well, laid it off and got in the box. Obviously that's through developing and maturing."