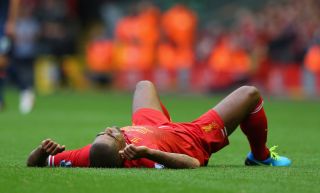 Johnson sustained an ankle injury in Sunday's 1-0 win over Premier League champions Manchester United and the defender was substituted late on at Anfield.

In-form Sturridge, who has netted five time in all competitions this season and was on target against United, is being hampered by a thigh problem that has left England manager Roy Hodgson sweating on the fitness of the Liverpool pair.

Liverpool manager Brendan Rodgers insists Johnson and Sturridge will only link up with England – who face Moldova on Friday and Ukraine a week on Tuesday – if they are fit to do so.

On Sturridge, Rodgers said: "We just need to assess it.

"We need to make sure we're thinking of Liverpool first. I would suspect with his quality, Roy will be looking at him to maybe being a starter, but priority will be Liverpool.

On Johnson, the Liverpool boss added: "He took a bad knock - he turned onto his ankle.

"He's getting treatment at the moment."

News of injury concerns over Johnson and Sturridge comes a matter of hours after United manager David Moyes revealed that striker Wayne Rooney will miss England's qualifying double-header with a head wound sustained in training.