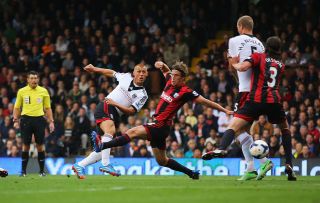 Sidwell, 30, has played every minute of Fulham's Premier League campaign, scoring twice in his eight matches.

The former Chelsea and Aston Villa midfielder, who is out of contract at the end of the season, scored an outstanding goal in Fulham's 4-1 win over Crystal Palace on Monday.

And Jol says he is ready to discard club policy - which sees Fulham rarely offer deals longer than one year to players over 30 - to keep Sidwell at the club.

"Of course you feel a bit worried after the game (when he plays like that)," Jol said.

"They all come back and instead of one-year deals they want three years you know and this is probably no different.

"For me Sidwell can stay for two years, for example. We are talking to him and offered him a one-year deal but who knows what will happen."

Jol's men travel to Southampton on Saturday hoping to post their third Premier League win in a row.

It will not be an easy task, with Southampton sitting sixth in the league after a bright start, but Jol is confident.

"Southampton are a strong team but we have done our research and have hopefully found a few weaknesses," he said.

Fulham defender Fernando Amorebieta acknowledged the threat that Southampton will pose, but is also buoyant ahead of their trip to St. Mary's Stadium.

Amorebieta told the club's official website: "Southampton are a team that does things very well.

"They've conceded very few goals but hey, I think we're entitled to take confidence from the win against Crystal Palace and go to Southampton full of enthusiasm and a will to win."