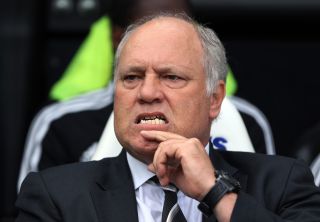 Hatem Ben Arfa struck in the 86th minute to snatch three points for Newcastle in an otherwise tense afternoon at St James' Park.

The match replicated the same fixture from last season, which saw Papiss Cisse score a fortunate 90th-minute goal to smuggle the points away for Alan Pardew's side.

Jol insisted his side had dominated the game, but was left frustrated as they failed to convert their pressure into goals.

He said: "I don't think it was tough. I thought we could have done a lot of damage today to get the points on the board.

"In midfield we played it in a little bit of a different style, but I think the only thing we can be critical of is I don't think we had the cutting edge.

"We had three or four situations where we could have punished them. It was almost too easy.

"In the second half we looked a bit tired and they put their pressure on and started to put all their defenders behind the ball.

"Of course, last year was the same when they scored one goal and they were over the moon and they thought they played great - but they didn't. We should have had at least a point today."