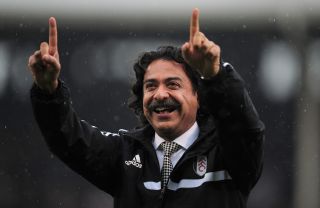 Khan – who bought Fulham for £150million in July – was in attendance at Selhurst Park as Jol's side romped to their second successive Premier League victory.

Fulham were forced to come from behind to win, with Adrian Mariappa's early header cancelled out before half-time thanks to stunning goals from Pajtim Kasami and Steve Sidwell.

Further strikes to Dimitar Berbatov and Philippe Senderos sealed the win, to the delight of new owner Khan.

Jol said: "He (Khan) was very pleased. He said we showed a lot of resilience and mentality.

"Last time when I saw him he was very pleased as well and before that he was in Costa Rica, so he looks a happy man. He is always satisfied."

Fulham's back-to-back wins have seen them climb to 14th in the table and they are now just one point behind the eighth-placed Manchester United.

A tricky trip to Southampton is their next challenge, and they are likely to miss Norway defender Brede Hangeland for the clash.

Jol was forced to take the commanding centre-back off at the break and revealed that he was suffering from a nerve problem.

"He is injured. He's got a nerve that caused him problems," he said.

"He played two games for Norway so I thought he was 100 per cent but at half time we had to take him off.

"It's a sciatic nerve from his Achilles. I'm not a doctor but a nerve can cause you problems."