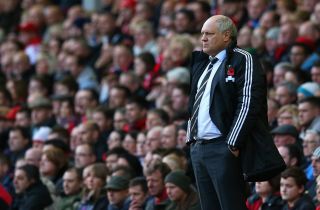 The Londoners were dispatched 4-0 by Liverpool on Saturday following a Luis Suarez brace, Fernando Amorebieta own goal and Martin Skrtel header to slump to a fourth consecutive defeat in all competitions.

But Jol pointed towards this season's victories over fellow strugglers Sunderland, Stoke and Crystal Palace as being more significant than their Anfield reverse and last weekend's similarly comprehensive loss to Manchester United.

"Just before Southampton away from home – which is a good team, they are in the top four – we had a very good spell," he said.

"We won three out of four games against normal sides and that is what you have to do. You have to keep your head cool.

"You have to try and get the points against these teams and hopefully in the next seven or eight months we will get results against top sides as well because that is what we used to do.

"Every manager in any team who is in the bottom six or seven, they have to keep fighting.

"At the end of the day, I think we will be fine but we have to suffer during these games."

Asked whether he thought he was still the right man for the Craven Cottage hotseat, Jol added: "I think you have to be an expert if you are in the bottom four or five to keep teams up and I don't think there's a lot of experts.

"I think there is a lot more teams that we can have results against.

"There are the top sides and then outside the top seven or eight they are no better than us. Those are the games where we have to get results."

Jol also explained that there was an strong element of damage limitation to Fulham's approach against Liverpool after they reached half-time 3-0 down, once again stating the greater importance of games against the Premier League's lesser lights.

"If you go to the top sides then you have to try not to concede goals," he said.

"You make it probably too difficult to get a result, so (in) the second half, the only priority most of the time with teams who are down 3-0 is to try and keep the score down.

"We like to get the results against the Crystal Palaces and the Stokes and the Sunderlands like we did.

"Against Man United and Liverpool, with that sort of strength and quality, you hope for a result but we couldn't (get one).

"It's not the end of the world but, on the other hand, it would have been great if we'd done what we did two years ago when we beat Liverpool home and away."