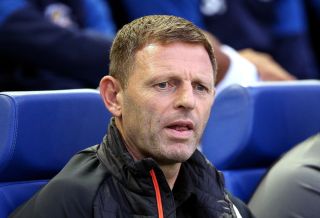 Luton manager Graeme Jones felt the defeat at Millwall summed up his Hatters’ struggles on the road this season after a second-half capitulation resulted in a 3-1 loss at The Den.

Sonny Bradley’s first-half header had put Luton ahead in their bid to arrest a run of eight successive away defeats in the Sky Bet Championship.

But Millwall fought back after the break, with Tom Bradshaw, Connor Mahoney and Matt Smith stunning the hapless visitors, who remain in the bottom three.

“The game plan worked really, really well, but we couldn’t sustain it,” said Jones. “It’s been the story of our away season, since (victory at) Blackburn.

“We’ve found it difficult. I could talk about the positives, but I don’t think anyone wants to hear that. It was a resolute display, for 70 minutes. But we couldn’t hold out, and that’s what disappoints me.

“For large periods I was delighted but we couldn’t see it out. The linesman’s flag goes at 1-0 up, but the referee plays advantage and the wrong thing from our players is not playing to the whistle.

“I had five players stopping – the ball goes in the box, goal. On the second goal I’ve got (centre-back) Matty Pearson dribbling up the pitch – I’ve certainly never asked him to do that – and in transition Alan Sheehan is running back and he gets cramp.

“And that is just the definition of where we are at the minute. We need to have a level head, be sensible, get our best players fit, and we need to get some reinforcements in.”

He headed his side level but Mahoney’s introduction proved vital as he scored a fine individual goal before teeing up Smith for the game-killing third.

“I just felt Connor might give us a moment of magic because he’s got that quality,” said Rowett. “It was a fabulous run from him. He fakes to shoot, the defender slides in and it just opens the space up momentarily.

“Then we could put the foot on the gas, another fabulous ball in from Connor and Smith doesn’t miss from there, it’s why he’s in the team.

“I said to them at half-time, ‘you’re a goal down, you’ve performed poorly, I don’t really care about the result, I just want to see a better performance and be braver, play with more quality’.

“I thought we started the second half with a much better intensity, pinned them in and put them under pressure.

“And when you’re in the position Luton are in, if we could get the first goal in the second half, we knew we’d go on and win the game.”