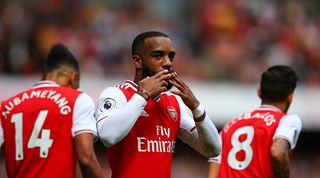 Jose Mourinho believes a change of formation could bring the best out of Arsenal's front three.

Nicolas Pepe, Alexandre Lacazette and Pierre Emerick-Aubameyang started as the most advanced trio in the Gunners' 4-3-3 for Sunday's draw with Tottenham, with Unai Emery fielding Matteo Guendouzi, Granit Xhaka and Lucas Torreira behind them in a flat midfield three.

However, Mourinho believes that the introduction of a No.10 - a role filled by substitute Dani Ceballos in the second half - could make Pepe, Lacazette and Aubameyang even more dangerous.

"I think they are very good players and normally they should be on the pitch all three together," Mourinho told Sky Sports after the north London derby.

"What happens at Liverpool is [Roberto] Firmino drops back, drops in between the lines, and then he gives more space for [Mohamed] Salah and [Sadio] Mané to attack these diagonals. I would see Aubameyang playing on that left side of Liverpool and scoring a lot of goals.

"At Arsenal, Lacazette doesn’t have that quality, but they have two options. One is to play, instead of like today with three midfield players almost in a straight line, to play how they played in the last 10 or 20 minutes with two [sitting midfielders] and one No.10 that can feed the three without bringing Lacazette in between the lines.

"Another situation that is very possible is to bring Pepe from the right and in many occasions bring him to the inside. Many teams nowadays defend with a back four but build with three in the back, and by doing that they can put, for example, a right-back completely wide almost as a winger and bring the winger to the inside.

"So if Pepe plays more on the inside, he can feed more that diagonal to Lacazette and do what Guendouzi did for the last goal [for Aubameyang], Pepe doing that from the right with his left foot finding Lacazette on the diagonal.

"So they have lots of options. These three players are very good. They had on the bench [Henrikh] Mkhitaryan, [Mesut] Ozil, Ceballos, who are players also who can give things. I think from the middle to the attacking areas they have a lot of solutions to develop."

Arsenal came back from 2-0 down to draw with Spurs on Sunday, leaving them fifth in the Premier League table after four games.