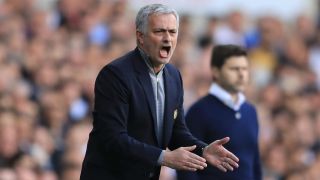 Manchester United manager Jose Mourinho says he would rather be on the training ground than playing Southampton and wishes he could make more changes to his team after making four for Wednesday's match.

Sergio Romero, Matteo Darmian, Henrikh Mkhitaryan and Marouane Fellaini were brought into United's team for the away Premier League clash, with David de Gea, Daley Blind, Michael Carrick and Jesse Lingard dropping out, while Paul Pogba is still missing on compassionate grounds after the death of his father.

A frustrated Mourinho would like to have felt able to make more changes to United's team, but insists he will do exactly that for Sunday's match against Crystal Palace, the timing of which he remains unhappy about.

United still have those two league matches to play before the Europa League final against Ajax in Stockholm on May 24.

"I need to pick a team with some balance, I have to try and give rest to some and I have to try to give some minutes to others – it is more of the same," Mourinho said to Sky Sports.

Asked if the match could be used to help prepare for the final, Mourinho replied: "No, not really.

"I would prefer to be working in training and preparing but we can't do that, we have two matches to play and I repeat: I would like to make more changes. I would like to give more rests.

"But we feel a responsibility at least to do what we did against Arsenal and Tottenham which was to compete for the result until the final [whistle]. So we are going to do that again."

"So it [my selection] will be different on Sunday."