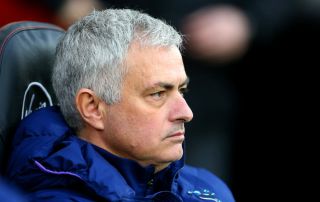 Tottenham boss Jose Mourinho said he is “playing a game of chess without any pieces” after his side overcame selection issues to beat Southampton 3-2 in their FA Cup fourth-round replay.

Spurs produced a late escape as goals in the final 12 minutes from Lucas Moura and Son Heung-min set up a fifth-round meeting with Norwich, but Mourinho admitted the best team lost.

Tottenham went ahead through Jack Stephens’ own goal but were heading out after Shane Long and Danny Ings put Southampton in front.

Mourinho was without the injured Harry Kane, Moussa Sissoko, Ben Davies, Giovani Lo Celso and Erik Lamela, while a half-fit Dele Alli came off the bench and Steven Bergwijn was ineligible.

“I had to manage this chess game without pieces,” he said. “You know. No bishops, no kings, no queens. Very, very hard with so many injuries and problems. No Bergwijn.

“I cannot speak about the progress I want to make because I don’t have the players I want.

“We lose so many. Sissoko, Harry, and today Lamela, Lo Celso and Bergwijn. It is so difficult.

“One game we have players A, B and C out and then the next game we are without D, E and F. It’s been a very difficult season.

“So everything was like when you pull a blanket up and your feet are left out and then you cover your feet but half of your body is out. That’s us. But amazing spirit, and that is something I like.

There was a sad moment during the second half as Jan Vertonghen, a player who has given eight years of service to Spurs, looked inconsolable having been substituted.

The 32-year-old, who is out of contract in the summer, has been exposed on a number of occasions this season and had the look of a man who knows his days at Spurs are numbered.

Mourinho said: “No injury, it was my decision. It’s normal that he’s sad. No player likes to come out.

“I decided to sacrifice Jan, so sad yes and with a reason to be sad, but happy now because he won.

“I don’t need to speak to him because he’s an intelligent guy. He’s very professional and it’s obvious that I did it not to punish because he was playing exactly the same as the others.”

Southampton will be wondering what went wrong after going in front as they collapsed.

They had been by far the best team up until Ings’ 72nd-minute goal and should have been comfortably out of sight.

Mourinho’s words were of little comfort to boss Ralph Hasenhuttl, who confirmed that James Ward-Prowse’ serious-looking injury was not as bad as first feared.

“It is easy for him to praise us. They were more clinical because in the last 15 minutes they turned the table in the way that is part of a good team.

“We couldn’t defend how we wanted to because this is very disappointing for me. Being strong for 75 minutes is not enough.”