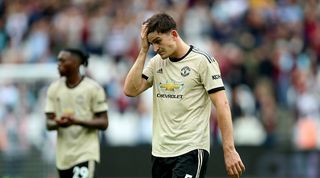 Jose Mourinho has criticised Manchester United for their performance in Sunday’s 2-0 defeat by West Ham.

Manuel Pellegrini’s men scored either side of half-time to seal a comfortable victory for the hosts at the London Stadium.

United were poor throughout the game and have now won only two of their opening six Premier League matches this season.

They are already closer to the bottom of the table – six points separate United from 20th-placed Watford – than the top.

And Mourinho, who was replaced as the club’s manager by Ole Gunnar Solskjaer last December, believes there were no positives for his successor to take from the display in east London.

“We were bad last season, but I don’t see any improvements this season,” he told Sky Sports.

“I like the three [new signings – Daniel James, Aaron Wan-Bissaka and Harry Maguire], they bring some good quality to the team. The team as a team, I don’t like at all. I’m not surprised by the result.

“At this moment I think United is missing everything. It looks to me a set game, a game of let’s see what is going to happen.

“Going back to Roy [Keane]’s comments [on United not pressing the ball] which I have to agree totally with, sometimes players are a bit confused and it’s difficult for them to understand.

"I always think that when a block is low and compact, like United was, they had eight players in the area.

“You are in a great condition to press the ball because you have lots of people close to each other. Since the position of Andreas Pereira, close to the man with the ball, there’s no pressing. Then [Nemanja] Matic, no pressing, then movement in the space and nobody goes.