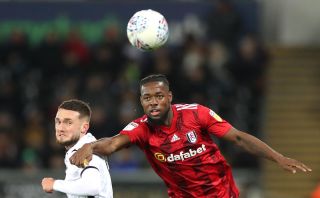 Fulham midfielder Josh Onomah has been ruled out for at least six weeks following knee surgery.

Onomah, 22, damaged a knee during the recent 3-0 home defeat to Barnsley and had an operation last weekend.

Fulham boss Scott Parker told the club’s official website: “It’s obviously disappointing regarding Josh. He had surgery on Saturday morning on a knee injury, which he sustained against Barnsley.

“He looks like he’ll probably be out for at least six weeks I would have thought, so that’s a big disappointment.

“He’s come into the team and done very, very well. He gives us a different dynamic in the sense of what our other midfielders have got.”

Fulham signed Onomah last summer from Tottenham as part of the £25million deal that saw Ryan Sessegnon move in the opposite direction.

Onamah missed last Friday night’s draw at Derby, but had started in all of their nine previous matches in all competitions.