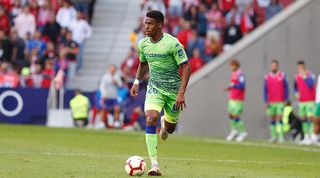 Barcelona have made an improved offer in the region of €27m for Real Betis left-back Junior, according to Sport.

Barça currently have only one recognised left-back, in the shape of 30-year-old Jordi Alba. Ernesto Valverde has earmarked Junior as a potential long-term replacement after his impressive performances for Spain's under-21s this summer.

With some reports suggesting that the bid has already been accepted, it looks like this will soon be a done deal despite Junior's release clause at Betis being reported at €50m.

Junior was born in the Dominican Republic, and became the first Dominica-born player in La Liga when he made his debut for Real Betis in 2018.

Betis have already moved to secure a replacement for Junior by signing Alfonso Pedraza from Villareal on loan with an option to buy.

7 intriguing transfers that have gone under the radar this summer