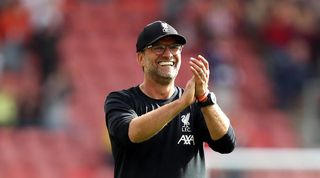 Jurgen Klopp has predicted a difficult few months ahead for Liverpool as the club targets its first league title since 1990.

The Reds have enjoyed a superb start to 2019/10, winning eight and drawing one of their opening nine fixtures.

Victory over Tottenham on Sunday would see Klopp’s side regain their six-point over reigning Premier League champions Manchester City, who beat Aston Villa on Saturday.

But while the Liverpool boss admits his side are in a fantastic position, he has stressed the need for calm ahead of a crucial few months.

“We are in a better position than we would have expected at the start of the season,” Klopp told Sky Sports.

“Are we already through? No. We have created a proper basis to work with. The hardest period ever will come up again. November, December, crazy.

"We have to be lucky in some moments. We have to fight for it, and that's what we do. No guarantees.”

Liverpool’s clash with Tottenham at Anfield will be the first time the two teams have met since the Champions League final in June.

Goals from Mohamed Salah and Divock Origi gave the Reds their sixth European crown, and Klopp has opened up on what the victory felt like.

“It was incredible," Klopp said of the win in Madrid over Spurs. "But it's a nice memory, wonderful, great, everything perfect, but it's gone, it's history.

"It's a nice part of life, but nothing else changed. It was probably the best summer of my life.

"The boys started the season in a different mindset, more convinced about themselves. I feel there is still a lot of space in that department, where they can be more convinced.”

Tottenham have endured a difficult start to the campaign and will fall 16 points behind league leaders Liverpool with defeat on Merseyside.

But Klopp believes his team must still be wary of opponents who have caused Liverpool problems in recent seasons.

“I don't understand 100 per cent what happened, but what I saw during the week [in a 5-0 win against Red Star Belgrade is how Spurs can be," he added.

"That's the team we prepare for, not the team who struggled three or four weeks ago.

"We need to be intense, because a little bit against Tottenham will not be enough. They want to strike back!"