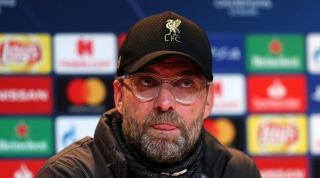 Jurgen Klopp has committed his future to Liverpool after Franz Beckenbauer admitted he would love to see the German in charge of Bayern Munich.

Klopp’s side knocked Bayern out of the Champions League with a 3-1 victory at the Allianz Arena on Wednesday, a result which increased the pressure on Niko Kovac.

And although Klopp spoke of his admiration for Beckenbauer, who made 567 appearances for Bayern and later managed the club, he insisted that he will not be departing Anfield any time soon.

“There is no bigger legend in Germany than Franz Beckenbauer,” Klopp said. “It feels great he speaks positively about me. It is just like the king with his sword calling a man ‘sir’.

“If he thinks that, it is a compliment to Liverpool. Bayern have done everything right in the last 10 or 15 years without making many mistakes but I feel I am a good fit where I am.

“I love it here, there are lots of opportunities to develop an already really good team. I have enough confidence to say I am the right manager for Liverpool at the moment, though in football we all constantly have to prove ourselves.

“So far it has worked out and hopefully it will last a lot longer. That would be cool, because I hope that in 50 or 60 years I can be remembered without referring to managing many different clubs. I am happy with the clubs I have had.”

Liverpool will return to the top of the Premier League table if they beat Fulham at Craven Cottage on Sunday.