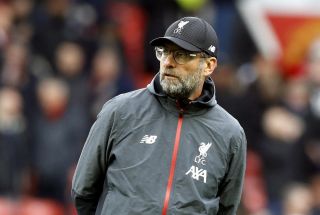 Liverpool manager Jurgen Klopp accepts his side will not be so lucky this season if they do not improve their Champions League away record.

For a team which has reached successive finals, Liverpool’s record on the road in the group stage is terrible.

They have lost their last four away games, scoring only once, and have not won any of the previous five with the last victory on the road in Europe in the group stage at Maribor two years ago.

That success in Slovenia remains their only victory in the last 10 away group matches.

We’re LIVE with the boss and @JamesMilner, as they preview our clash with @KRCGenkofficial 💪 https://t.co/urtvrKExGD— Liverpool FC (@LFC) October 22, 2019

Liverpool scraped through last season with a 1-0 win over Napoli in their final home game, three Anfield victories giving them nine points and second place in their group.

“Last year we were lucky with how tight the group was that we could lose three times away and still have a chance to make it through the group. That will not happen this year. It’s completely different,” said Klopp.

“We don’t rely on home games or whatever. Obviously we like to say European nights at Anfield are really special but other teams can make a special atmosphere as well.

“They are not all the same, we could have won away games to be honest performance-wise which we didn’t win for some reason.

“We know it’s not historically good what we have done (in the away group games) in the last few years, but in general the Champions League was obviously really good.

Their away form is something of a mystery for a side which has reached back-to-back Champions League finals, winning their sixth European Cup against Tottenham in Madrid in June.

That form – and missing out on a first domestic title in 29 years to Manchester City by a point – was recognised by the club receiving seven Ballon d’Or nominations.

Klopp joked that he was surprised there were not more besides goalkeeper Alisson Becker, defenders Virgil Van Dijk and Trent Alexander-Arnold, midfielder Georginio Wijnaldum and forwards Mohamed Salah, Sadio Mane and Roberto Firmino on the 30-strong shortlist.

“My first question was: ‘Who has not been nominated?” he said ahead of the Champions League match in Genk.

“When players win it, it is big. When they don’t, hopefully it doesn’t hurt too much. The way we played last season it’s normal so many would be nominated by the experts.

“I am proud in general of the boys, 100 per cent. I don’t feel proud at that moment because it is seven of the boys. I like that and I am happy when they win things.

“If it is a sign that we are a destination, I do not know. We will see. It looks like we are comfortable with each other.

“We want to work together for the next couple of years together or more but we will see what the future brings.”