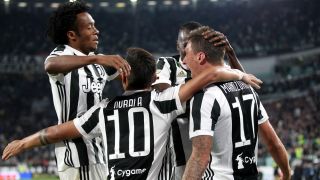 Juventus made it five wins from their opening five Serie A fixtures as Mario Mandzukic's second-half header sealed a 1-0 victory over 10-man Fiorentina.

After a slow start at the Allianz Stadium, Juve had to wait until the 52nd minute to find a way through Fiorentina's stubborn backline.

The outstanding Juan Cuadrado was the architect with a brilliant delivery from the right, and Mandzukic made no mistake in nodding home his second goal of the campaign.

Paulo Dybala looked set to be provided with an ideal opportunity to continue his incredible goalscoring form when Blaise Matuidi was brought down by Milan Badelj on the cusp of Fiorentina's area, but although the referee initially awarded a penalty, he reversed his decision after utilising the VAR system.

Badelj nevertheless picked up a second booking for his troubles as Fiorentina were reduced to 10 men, with Mandzukic twice going close shortly after.

Ultimately though, the official's decision and Mandzukic's misses mattered little, as Juve held firm to maintain their winning streak and join Napoli at the top of Serie A.

3 - Mario Mandzukic has scored three goals against Fiorentina, his best victim in Serie A. Enemy. September 20, 2017

Looking to build on his scintillating form, Dybala was the first to engineer an effort on goal as he curled an excellent free-kick wide nine minutes into a largely uneventful first half.

Juve wanted a penalty soon after, with Gonzalo Higuain having gone down under pressure from German Pezzella, but the referee dismissed the hosts' appeals.

Fiorentina almost caught Juve cold with a rare venture forward - Andrea Barzagli picking up a booking for a foul on Giovanni Simeone - but Jordan Veretout could not keep his effort down.

Despite dominating, Juve could not find another opening until the stroke of half time, when Higuain turned sharply to unleash a powerful strike that looped just over.

But Juve did finally craft their opener seven minutes after the restart.

Cuadrado found space on the wing, proceeding to whip in a sublime cross that Mandzukic met with a well-timed diving header into the bottom-left corner.

Juve should have extended their lead moments later - Cuadrado again the provider with a fantastic low cross - but neither Higuain nor Mandzukic were alert enough to make contact.

Badelj's careless lunge on Matuidi just after the hour saw the midfielder receive his marching orders, only for the referee to award a free-kick rather than a spot-kick after assessing the video replay.

Mandzukic could have then put the game beyond all doubt with two close-range efforts that forced Marco Sportiello into action.

And Juve were almost made to pay for the Croatian's poor finishing late on, with Fiorentina substitute Gil Dias causing havoc, but Wojciech Szczesny's clean sheet stayed intact as Juve claimed the points.