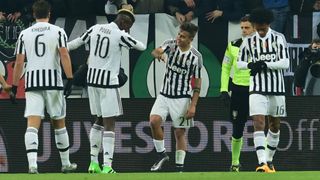 Paulo Dybala's late goal saw Juventus make it 11 Serie A victories in succession with a hard-fought 1-0 triumph against Roma on Sunday.

After a poor start to their quest for a fifth successive Scudetto, a resurgent Juve have roared back into the title race with an impressive run of form that has helped them ascend to second place in the table.

Having seen Napoli extend their advantage at the summit to five points with a 4-2 win at Sampdoria earlier in the day, the pressure was on the champions to respond at Juventus Stadium.

For long periods, it looked as though they would be frustrated by a stubborn Roma outfit in Luciano Spalletti's second game back in charge.

But Dybala continued his own personal purple patch with a clinical finish in the 77th minute from Paul Pogba's cute pass - an eighth goal in the last 10 league outings for the Argentinian.

There had been seven red cards in the last five meetings between these two sides, and an early off-the-ball tangle between Daniele De Rossi and Mario Mandzukic set the tone for a fractious opening, with the Roma man perhaps fortunate not to see red for standing on his opponent's foot.

De Rossi was cautioned for the incident and Dybala sent the subsequent 20-yard free-kick straight at Wojciech Szczesny.

Midway through the half, Patrice Evra sliced wildly at two efforts in quick succession before Pogba - sporting an eye-catching leopard-print pattern in his hair - headed over from eight yards as Juve dominated.

Roma grew into the game as the half wore on, and Alessandro Florenzi wasted an excellent opening in the 37th minute when he swung wildly at an effort from inside the box which flew high and wide.

Juve felt they should have had a penalty three minutes later when a dropping ball struck Miralem Pjanic on the arm, but the referee awarded Roma a free-kick for a separate infringement.

The first notable effort of the second period did not arrive until the 68th minute, as substitute Juan Cuadrado brought a save out of Szczesny low to the goalkeeper's right.

A minute later, Szczesny was tasked with a much more difficult save as he spread himself to parry Evra's thunderous effort from a tight angle.

But the Poland goalkeeper could do nothing about the winner 13 minutes from time as Pogba slipped a pass into the path of Dybala, who finished left-footed beyond Szczesny and into the bottom-right corner to extend Juve's stunning sequence of form.

-Roma fired only two shots (inc blocks) in the first half against Juventus - only against Torino (0) have the Giallorossi fired less shots in the first 45 minutes this season.
-Dybala has been directly involved in 19 of 38 Serie A goals for Juventus goals this term (50 per cent, 12 goals and 7 assists).
-Only Frosinone (11) have conceded more goals than Roma (10) in the last 15 minutes this season.
-Only against Napoli (0) have Roma fired less shots on target than vs Juventus (1) in this match.
-Juventus have won their last five home league games against Roma, always scoring at least one goal.
-Juve have scored in each of their last 13 home meetings versus the Roma (27 in total).
-In those last 13 games played in Turin, Roma have won once (2-1 in January 2010), with nine wins for the Bianconeri and three draws.
-Only Inter (14) have conceded fewer goals than Juventus (15) in this Serie A.
-Luciano Spalletti has lost 16 of the 19 games played versus Juventus in Serie A and he has never won against the Bianconeri in the league (three draws).
-There were only three corners in Juventus-Roma, less than in any other match of this Serie A.